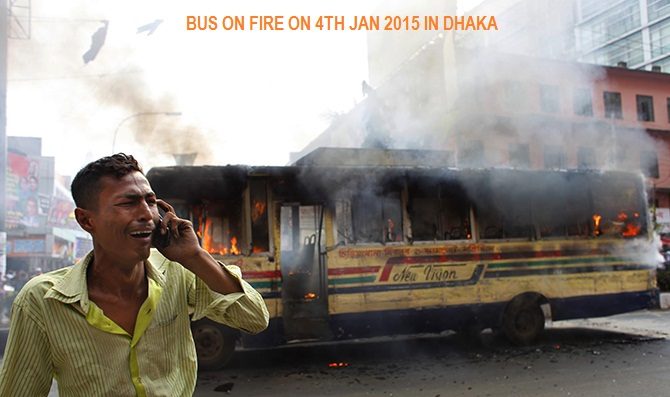 Miscreants set fire to seven vehicles today in the evening– 5 buses and 2 CNG-run auto-rickshaws — in Dhaka, Gazipur and Mymensingh today ahead of January 5 polls’ first anniversary.

According to the news from Fire Service and Civil Defence department, the arson took place in near Paltan, near Jamuna Future Park, and at Dayaganj in Old Dhaka and in front of Golap Shah Mazar near Gulistan in the capital between 2:15pm and 6:00pm.

No injury or arrest was reported from these incidents. Miscreants set fire to a passenger bus near the Baitul Mukarram National Mosque in Dhaka around 2:15pm, Mohammad Shohag, a duty officer of the Fire Service and Civil Defense, told us.

In Mymensingh, unidentified miscreants set fire to a bus and a CNG-run auto-rickshaw on the Dhaka-Mymensingh highway near Mymensingh Medical College Hospital around 2:30pm, said Abu Md Fazlul Karim, officer-in-charge of Kotwali Police Station. Two units of firemen doused the blaze of the bus which was going to Mymensingh from Trishal, the police officer told our Mymensingh correspondent. BNP-led 20-party alliance is scheduled to hold a rally in the capital tomorrow denouncing the January 5 elections.

Meanwhile, Awami League , the leading party has opted for anniversary programme on the occasion of the January 5 elections tomorrow at 16 different points of the city. The Awami League will celebrate the 1st anniversary of the one-sided election as “Victory Day for Democracy” while the BNP-led alliance wants to observe it as “Killing Day of Democracy“.