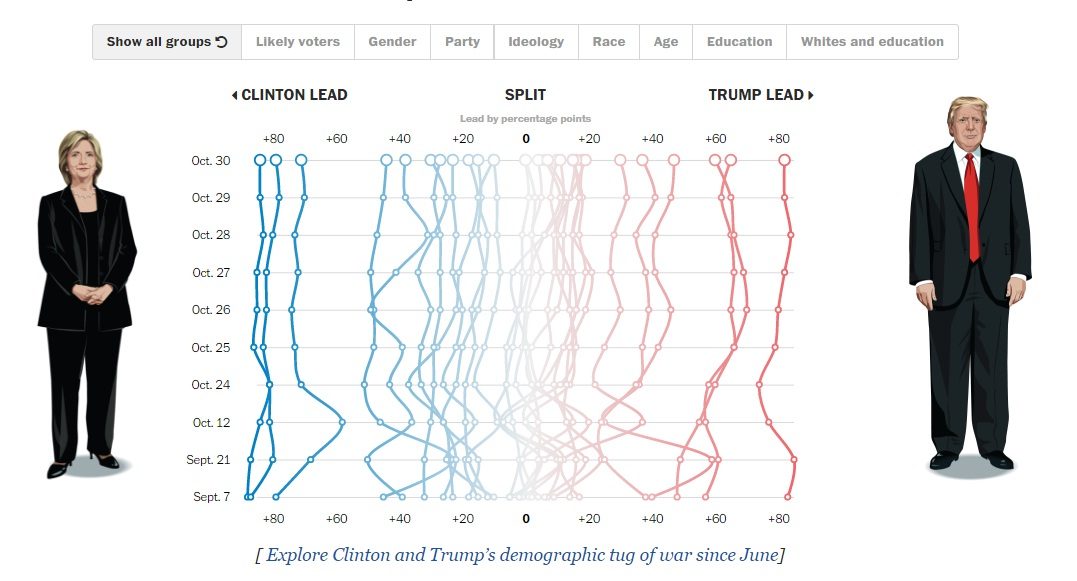 At last Hillary Clinton couldn’t hold onto the Obama coalition that proved to be a large part of her undoing.

African-American, Latino and younger voters failed to show up at the polls in sufficient numbers Tuesday to propel Clinton into the White House.
Clinton conceded the race after 2 a.m. ET. Before polls closed her campaign had been confident of victory. In the end, however, she lost even some states thought to be safely in her column, like Wisconsin. She trailed in others, like Pennsylvania and Michigan.
While Hillary won the key demographic groups her campaign targeted, she under performed President Obama across the board, even among women, according to exit poll data.
A slightly larger share of black and Latino voters cast ballots for Trump than supported Mitt Romney in 2012, despite Trump’s disparaging remarks on African-Americans, Mexicans and undocumented immigrants.
President Barack Obama, who captured the presidency with the help of the African-American and Latino communities, issued several personal pleas to black voters to back Clinton in recent weeks.
“If we let this thing slip and I’ve got a situation where my last two months in office are preparing for a transition to Donald Trump, whose staff people have said that their primary agenda is to have him in the first couple of weeks sitting in the Oval Office and reverse every single thing that we’ve done,” Obama said last week during an interview on a syndicated radio program.
But not enough African-Americans, along with Latinos, heeded the call.
Some 88% of African-American voters supported Clinton, versus 8% for Donald Trump, as of very early Wednesday morning. While that’s a large margin, it’s not as big as Obama’s victory over Mitt Romney in 2012. Obama locked up 93% of the black vote to Romney’s 7%.
Some 12% of the electorate was African-American this year, compared to 13% four years ago. That’s a key drop, especially when paired with a smaller-than-expected growth in Latino votes.
This lowered turnout happened even after Trump repeatedly made sweeping comments about how black communities were in the worst shape ever. Referring multiple times to “inner cities,” Trump said black people live in poverty, have no jobs and get shot walking down the street. “What do you have to lose?” he asked.
Read: Trump: Black communities in worst shape ‘ever, ever, ever
Clinton’s support among Latinos was even more tenuous, despite Trump pledging to build a wall on the Mexican border, accusing undocumented immigrants of being criminal aliens and promising to deport them.
Only 65% of Latinos backed her, while 29% cast their votes for Trump. In 2012, Obama won 71% of the Hispanic vote and Romney secured 27%.