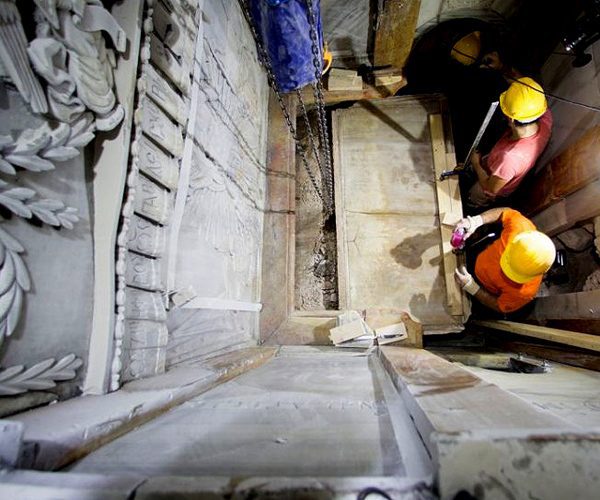 At last, with the great help of researchers in Jerusalem, Jesus Tomb Uncovered for the first time in the centuries. This Jesus burial slab was covered by marble cladding from 1555 A.D. It has been opened as part of a major restoration project at the church.

Live science says, “The original rock where Jesus Christ is traditionally believed to have been buried in Jerusalem has been exposed to the light of day for the first time in centuries.”

According to the report by National Geographic, the original rock surface was covered with marble slabs from at least 1555, and possibly longer. During a conservation project to shore up the shrine surrounding the tomb, a team from the National Technical University of Athens in Greece realized that they would need to access the substructure of the shrine to restore it, said Fredrik Hiebert, the archaeologist-in-residence at the National Geographic Society.

“The marble covering of the tomb has been pulled back, and we were surprised by the amount of fill material beneath it,” Fredrik Hiebert, archaeologist-in-residence at the National Geographic Society and a partner working on the restoration project, told National Geographic. “It will be a long scientific analysis, but we will finally be able to see the original rock surface on which, according to tradition, the body of Christ was laid.”

According to Christian tradition, the rock surface, or “burial bed” is a sacred symbol for the religion, as it was moved from the side of a cave three days after Jesus Christ’s crucifixion and represents Christ’s resurrection from the dead.

The “burial bed” is now part of the Edicule in the Church of the Holy Sepulchre, according to National Geographic. This small structure was rebuilt in the early 1800s after it had been destroyed by fire, and it’s now being restored by scientists from the National Technical University of Athens, Fox News noted.

“We are at the critical moment for rehabilitating the Edicule,” Antonia Moropoulou, the National Technical University’s Chief Scientific Supervisor, told National Geographic. “The techniques we’re using to document this unique monument will enable the world to study our findings as if they themselves were in the tomb of Christ.”

Some theological historians believe that Jesus was a real man who was born sometime around the year 1 or earlier in Bethlehem in modern-day Palestine, only later to move to Nazareth in Israel. He is thought to have died around the year 29.

Workers remove a marble slab covering the original stone “burial bed” where Jesus Christ is said to have been laid to rest after being crucified. A layer of loose fill material is seen beneath. Scientists were surprised at how much of the original cave structure remained, said National Geographic archaeologist-in-residence Fredrik Hiebert.

The site venerated as the tomb of Jesus is encased in structures like a Russian nesting doll. According to the Hebrew Bible, Jesus was laid to rest on a stone platform in a cave hewn out of a rock wall. In 326, the first Christian emperor of Rome, Constantine, sent his mother, Helena, as a representative to Jerusalem, where locals pointed out one cave among an area of first-century burials that was said to hold the Jesus tomb .

Constantine had a shrine installed over the cave. The original top of the cave was removed so that pilgrims could look down and view the slab where Jesus’ body was said to have rested. This shrine is known as the Holy Edicule, and it was last reconstructed after a fire in the early 1800s, according to National Geographic.

The Holy Edicule itself sits within the Church of the Holy Sepulchre or Church of the Resurrection, which is a famed pilgrimage site and working monastery. It’s built directly over the cave where Jesus was said to be buried; another wing sits over the site where he is said to have been crucified. Three sects jointly manage the site: the Greek Orthodox Church, the Roman Catholic Church and the Armenian Orthodox Church. The three groups agreed in 1958 that conservation of the Edicule was necessary, but it’s taken nearly 50 years to agree on a method and to secure funding. (According to National Geographic, the project will cost more than $4 million.)

“There was a moment in which you could see on the faces of the important people of the church, a certain happiness that this has actually happened,” Hiebert said of the conservation.

A grid of iron bars installed in the 1940s held the Edicule structure upright until the project started. Now, Hiebert said, the Greek team — with years of experience under their belts of shoring up ancient structures like the Parthenon — will inject mortar around the marble slabs that make up the Edicule.

“This will permanently restore them, and it won’t need supports,” Hiebert said. 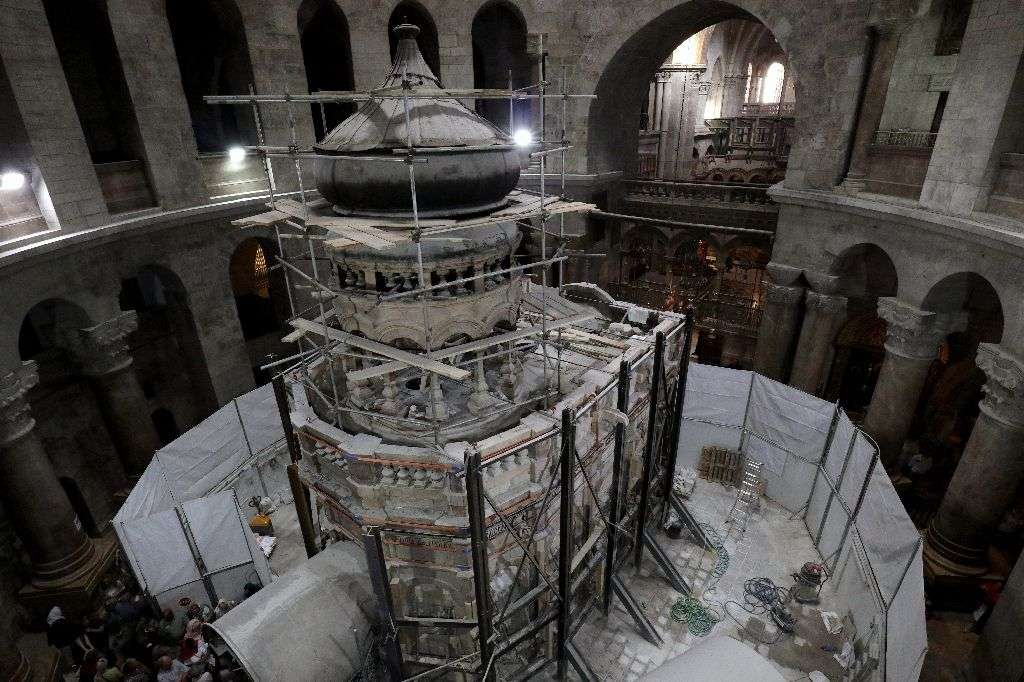 As to whether the tomb ever contained the remains of the historical Jesus, “it’s a matter of faith,” Hiebert said. There are no remains to analyze or DNA evidence to exhume. There is scholarly debate over whether Jesus even existed, said Robert Cargill, an archaeologist and author of “The Cities that Built the Bible” (HarperOne, 2016). A minority of historians think Jesus was a literary construct, said Cargill, who was not involved in the new tomb project, while others think a real person named Jesus existed but that little is known about him. 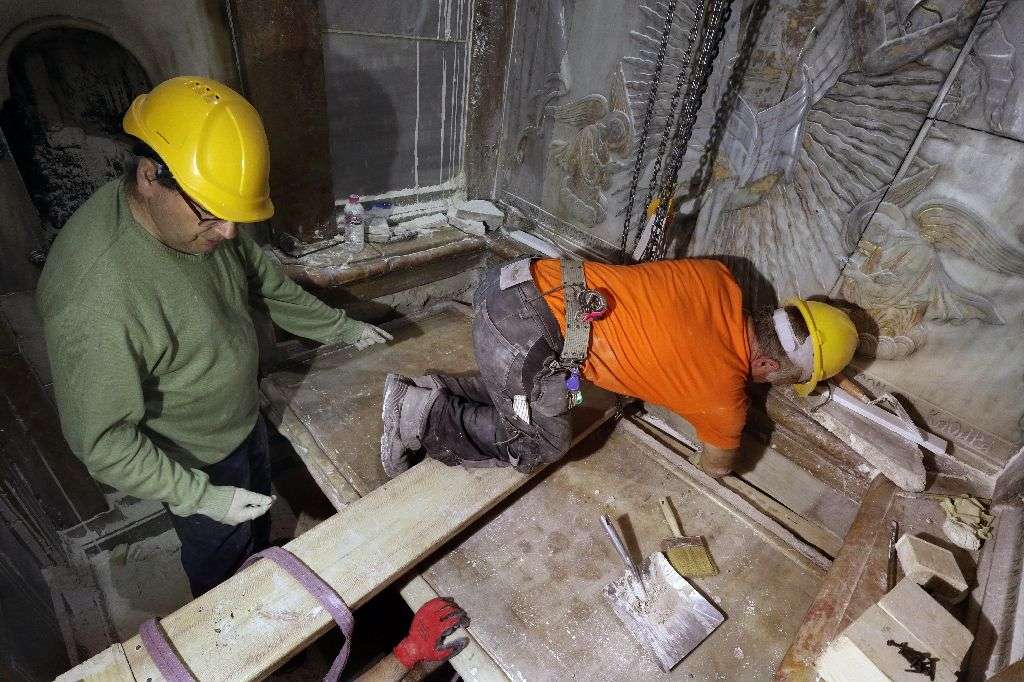 “We know that Romans crucified people and that people were buried there” in the first and second centuries, Cargill told Live Science. It’s also known that there was an oral tradition about the site of Jesus’ burial 300 years later, when Helena came to visit Jerusalem.

Nevertheless, Cargill said, the site is an important one for early Christianity and for the Christian cultural tradition.

The excavations are unlikely to reveal anything new about the history of early Christianity, particularly since the current Edicule structure is only about 200 years old, Cargill said. However, the conservation project has opened up a new view of this old site.

“You can actually look down onto the rock from above, which you couldn’t do when the Edicule is actually there,” Cargill said. “That’s a perspective that most people haven’t seen.”

Actually, there is no Jesus tomb in the earth right now as Jesus did not die as per Quranic Statement.