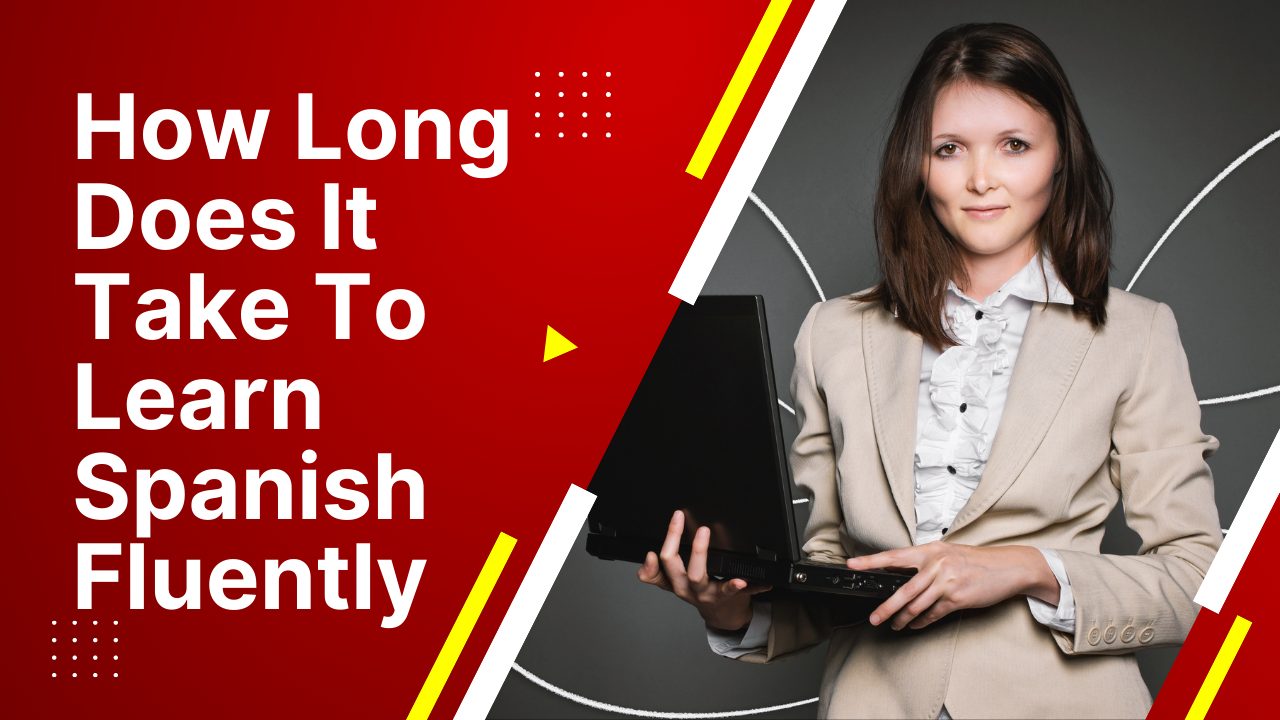 If you’re in the article looking for a number, sorry, there won’t be. I or anyone can’t give you an exact estimation of the period of learning Spanish.

The learning time solely depends on you and the things you’ll do in that phase. So, if you roll into a method that suits you perfectly, you’ll be fluent in a shorter time. Otherwise, it’ll take a long time.

I am a big Real Madrid fan and started growing my love for Spanish the very first moment I saw them play. I had one dream, “To Learn Spanish and Scream Hala Madrid Y Nada Más in Santiago Bernabeu.”

Yes, I wasn’t a native Spanish speaker back then. In fact, my first language was non-European. But with sheer determination and love for it, I can speak this language now.

Today, I’m gonna share my journey of learning Spanish with you so that you can understand every bit of mastering this language. If you stay with me the whole time, you’ll do far better than I did. Trust me!

What Do You Call Spanish Fluency?

Before jumping into my story, it’s necessary to understand what FLUENCY is. To be honest, there are a lot of definitions out there.

According to the British Council, Fluency is the flow and efficiency with which you express your ideas, particularly when speaking.

In simpler terms, fluency relates to everything where you can do the particular thing with utmost ease. This means that you won’t feel any pressure or distress to do that.

Just like that, if you reach a level where you can talk, write, and understand Spanish easily, you’ll be recognized as “Fluent in Spanish.”

It is also known as conversational fluency. Generally, the meaning of this term revolves around understanding 90 to 95 of everything.

In simpler terms, you will be able to identify what the other person is saying and act perfectly in most cases.

Maybe, complex technical terms are out of your prey, but you’re capable of taking on a 1-on-1 conversation at ease. You can ram your ideas clearly and communicate easily with the other person.

Basic fluency also says that your pronunciation is on point. So, native speakers can easily understand your tongue.

To reach this level of fluency, people need to spend 6-8 months of hardcore practice.

Native fluency suggests that you’ll be able to flirt with a native speaker, and they would be shocked to find out you’re an outsider. If I’ve to give you a number, I’d say you’d be able to understand 100 percent of the language.

This means, there’ll be no hesitation in speaking or listening. Cracking jokes, and using colloquialisms are regular in this case. From one-on-one to group speaking, there should be no discomfort.

Lastly, people with native fluency have perfect pronunciation. They can almost perfectly channel their words and phrases.

To be a native-fluent person, you need to spend 8 to 12 months with a hundred percent dedication.

To sum up, the first one works on the famous “20/80” method. That means 20% work and 80% result. On the other hand, native fluency depends on your hard work, practice, and commitment.

If you ask me which I vouch for, I’d say the second one. Because basics are a quick fix for me, and I always prefer options that give me a long-term result.

Now, let me give you an idea of how I started and let myself into the flow of Spanish.

It’s Important to Set a Goal

Well, when you’re learning a new skill or a language, you must set a goal for yourself. It’s not like you have to make some technical calls and come up with something solid. It’s more like where you want to see yourself after weeks, months, or years.

For example, I wanted to understand Spanish commentary after six months of my training. So, every day when I woke up “Learning Spanish” would always be on my to-do list. Since I had a target, it was easier for me to print out everything in my mind.

Before you start everything, bring out a pen and paper and write down your target. Ask yourself what you want to do with the tongue, and why you want it when you want it. This will help to boost your energy up to a certain level.

Now, when you’ve decided on your goal, it’s time to ask yourself about the actual MOTIVATION. Yes, it should be your trump card whenever you feel like letting go and having a break.

See, motivation can push people beyond their imagination. At first, I never thought I’d be speaking Spanish. But my love for REAL MADRID and Spain took me to the end. Now, I can talk, joke, and laugh in this beautiful language.

For me, you have to find your motivation and articulate in the right direction. For instance, if you have to move to Spain for your job, school, and family, you’ll have to learn Spanish. Otherwise, there’ll be no communication.

Hence, your job or school could be your motivation behind learning this language. The more you’re connected with your desire, the faster you’ll be able to achieve fluency.

The bottom line is that the correct motivation will make you a motivated learner. It helps people put their hearts into it and learn faster.

The efficiency of learning Spanish or other languages somehow depends on the mother tongue. If you belong to countries like Portugal, Brazil, Mexico, Greece, etc., you’ll need less time from a German to learn Spanish.

Portuguese sounds different from Spanish. But it has a similar vocabulary and grammar to Spanish. Hence, learning Spanish isn’t that difficult for Portuguese.

Just like that, Greek pronunciation has too much similarity with Spanish. So, it was easier for Greeks to learn Spanish.

I belong to a South Asian country, and there’s no connection between my mother tongue and Spanish. For this reason, I had to put extra effort into learning this language.

However, I knew English, and it helped me a lot. Since English and Spanish originate from Latin, they share a lot of similar vocabulary. According to experts, this similarity gives a person the vastest advantage in becoming bilingual.

Our brain takes time to get used to a new language structure. For this reason, if the structure of one’s mother tongue matches the one they want to learn, it becomes so much easier.

This is how your mother tongue decides how fast you’ll be able to learn Spanish.

I Surrounded Myself with Spanish

There’s nothing like a real-life experience. No matter how good your preparation is, it doesn’t matter unless you surround yourself with Spanish. Because only then you’ll be able to speak the words in an actual situation.

Practicing Spanish with friends and family is a better way of learning it. For instance, I started to call my mother MADRE and Father PADRE. Instead of a regular good morning text to my girlfriend, I started texting Buenos días, cariño.

Since I have a great book addiction, I started grabbing some of the Spanish classics too. This helped me to practice reading.

Not only books, I even watched Spanish movies and series to get familiar with the words and phrases. Spanish songs and a few YT channels also helped me along the way.

For solo practice, I installed the Duolingo app. It’s a helpful app for practicing new languages. The best part of the app is that it’s free, and a great number of universities accept its result to judge language proficiency. So, there’s no question regarding legitimacy.

Confidence is the Key

Learning a new language isn’t that easy. For the first few days, everybody is interested. But from time to time, the motivation graph starts to decay, and eventually, you quit. When you leave once, it takes your confidence away, and you never learn the language.

To avoid this, I always remained confident. Yes, there were some moments when I thought it was impossible. But I eventually did it. The trick was simple: Be Confident. Remember, you must have a goal, and you need to grab it.

Your attitude in the whole learning phase will decide whether you’ll achieve fluency or not. Because attitude will decide how much effort you’re gonna pour into. The amount of effort and dedication will decide the learning efficiency.

For this reason, it’s important to stick with the goal from the very beginning. This is what I did on my time and trust me this always works. Be confident in your journey!

I’ll assume you have a few questions in your mind regarding this factor. Let me answer those for you.

Who can learn Spanish?

Anyone with sheer determination can learn Spanish. To do that you need to focus on your goal of learning the language and practice accordingly. Practice can bring a lot of good things into your life including Spanish.

Is it good to be bilingual?

Yes, of course. Bilingual meaning you have a grasp of more than one language. This could be a very big advantage for you facing job interviews. Big corporations always want bilingual employees because they work with different clients from different countries.

Other than that, studies show that a bilingual person has more problem-solving ability than a regular person. So, it’s good to be bilingual.

Can a non-European person learn Spanish?

The answer is, why not! A lot of non-European people know Spanish. This one comes fourth in the most widely spoken languages. So, it’s obvious people outside Europe can learn and speak the tongue.

From Africans to Asians, everyone can learn Spanish.

Do I need a paid course to speak Spanish?

The answer would be both yes and no. It solely depends on you what you need. Let me tell you how.

Paid courses work for a lot of people. Because in paid courses, you have a liability to finish and learn for what you’re paying for. If you’re one of ‘em, you need a paid course.

Other than that, no, YT and Google are enough to teach you Spanish.

How many hours do I need to put into learning Spanish?

Important thing is to be consistent. Put one hour a day but give it regularly.

The time regarding learning Spanish varies from person to person. It took me 8 months to properly speak the language following the above methods. But it could take more or less for someone to follow the same methods.

It’s not determinable. But it’s for sure that if you stay on your track, you’ll become fluent in Spanish eventually. For this reason, I’d ask you to get the gist of my methods and come up with your unique pattern.

This way, you’ll be able to learn Spanish quickly.