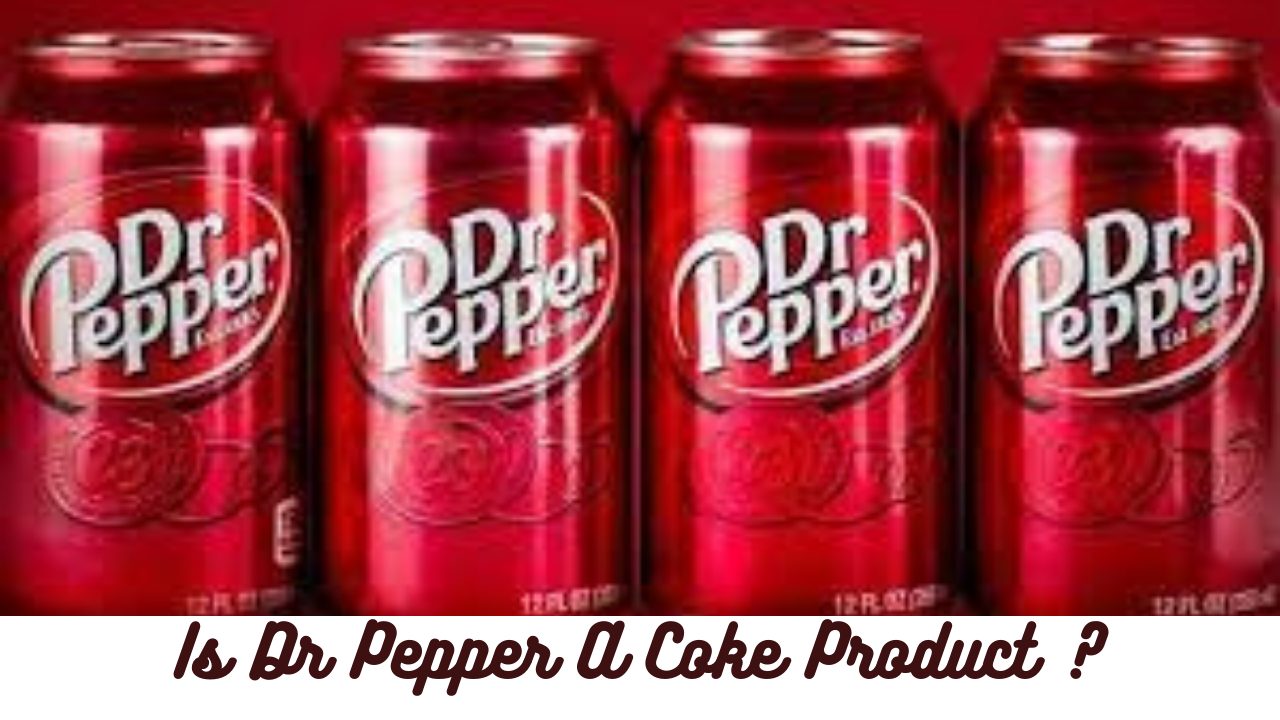 Is Dr Pepper A Coke Product ? Did you know that initially Dr Pepper was bigger than Coca-Cola?

Dr Pepper has been around for a very long time now and there’s been a lot of questions lately about whether or not it’s a coke product or a Pepsi product.

To give a fair answer to that question, let’s see what history has to tell us about this particular beverage in question: Dr Pepper.

Thereafter, I’ll answer the common questions you most likely have about this soft drink and its relationship with Coke or Pepsi.

Without further ado, let’s jump right into it

It started out as an experiment at a pharmacy in Waco, Texas.

A Brooklyn-born pharmacist by the name, Charles Alderton, invented the unique soft drink formula with the combination of 23 flavors.

The name of the pharmacy was “Morrison Old Corner Drug Store” owned by a man called Wade Morrison.

Alderton was working there at the time and typically back then, there used to be these soda fountains at pharmaceutical stores.

One day, he was over there mixing a bunch of these flavors in an attempt to make something that will capture all of the smell in the air coming from the different ingredients around.

The reality is, Dr Pepper wasn’t intended to be a popular drink as it is now from the beginning.

Charles was only trying to see what he could come up with by blending different fruit syrups together.

He wanted to create a unique taste from the different ingredients at the store.

He did the mixture and instantly fell in love with the outcome. He took it to his boss, Wade Morrison, who also loved it.

They served it to their customers and discovered that the customers too enjoyed it.

Although, at that time, it was called “Waco” to denote its place of origin.

However, as the demand grew, his boss, Wade Morrison came up with the name we now know as Dr Pepper.

Dr Pepper is considered to be the oldest beverage brand in America.

The name was first used commercially in 1885. Its introduction preceded that of coca-cola by 6 months.

It gained national recognition in 1904 at the Louisiana Purchase Exposition in the United States.

An exposition with over 20 million people in attendance and it was presented as a new kind of soft drink with 23 flavors.

In the 1950s, the full stop in “Dr.” was completely erased from the logo for legibility and style.

Fast forward to today, after the merger of Keurig Green Mountain and Dr Pepper Snapple Group to form Keurig Dr Pepper in 2018.

It is now the 8th largest food and beverage company in the US with 27k employees and an annual revenue in excess of $11 billion. (KeurigDrPepper)

Even at that level of growth and valuation, it’s still currently at an 18% market share.

Which by the way is an impressive percentage for a company in direct competition with major brands like Coca-Cola and Pepsi taking up 44% and 24% respectively. (Source: 2019 CSD U.S. Market Share)

How It Got The Name “Dr Pepper”?

How Wade Morrison came about the name “Dr Pepper” is still a mystery to this day. However, they’ve been a lot of rumors pointing to different events as the source.

Let’s take a look at a few of these theories:

The one and most likely reason behind the name was the common practice in vogue back then of including a prefix with Dr. on products to show that they are healthy to consume.

Another theory claims that there was an actual doctor who goes by the name Charles T. Pepper of Rural Retreat, Virginia.

And that the drink was named after him as Morrison’s show of gratitude to him for offering him his first-ever job.

Yet another story narrates Morrison naming the drink after the same Charles T. Pepper because he gave Morrison his daughter’s hand in marriage.

But she was only eight years old when Morrison moved to Waco, Texas.

Although, if I should take a wild guess, I’d say that he chose “Dr Pepper” for being a catchy name and it was advertised back then as a health drink sold at a pharmacy store.

So it makes absolute sense why it has the Dr. added to its name to help promote the brand.

Anyways, the unique flavor and appealing name caught on, making Morrison’s Old Corner Drug Store sell more Dr Peppers to a stage where the demand was way beyond the supply. Read Now:MOVING CHECKLIST – BEST WAY TO PREPARE YOURSELF FOR THE MOVE

But Charles Alderton, the original inventor, was more interested in furthering his work in medicine.

And as Morrison was making plans to expand the business, Alderton saw it as his opportunity to step away and focus solely on his medical career.

But Morrison saw the potential in Dr Pepper and went on to form a partnership with a nearby ginger oil company owner named Robert Lazenby.

It was the perfect team up.

Because Morrison had the recipe and brand establishment while Lazenby had the means for vast production.

They collectively grew Dr Pepper to become one of the favorite drinks in the local communities of Texas and a household name.

Unfortunately, in 1903, Wade Morrision died, and consequently, the involvement between the two originators came to a sad end.

However, the following year, which was 1904, Robert Lazenby demonstrated Dr Pepper at the World’s fair in Saint Louis giving the brand massive publicity.

It was quite an event and everything took off from there. Dr Pepper, from that point despite the odds and fierce competition, continued to thrive.

Now to the big question:

Does Pepsi Or Coke Own Dr Pepper?

It is worth mentioning here that Dr Pepper is a stand-alone beverage company under the umbrella of the Keurig Dr Pepper parent company.

So, is it owned by Coke or Pepsi? Far from it.

The reason why many would think so is because some Coke and Pepsi plants bottle and distribute Dr Pepper’s products.

In 1951, Dr Pepper sued Coca-Cola for $750,000, with the claims that nickel coca-colas were sold too cheap and were hampering trade. (Source: The New York times)

In fact, Coca-Cola didn’t stop there, but made another attempt to purchase Dr Pepper several years after the brand became insolvent in the early 1980s.

The deal didn’t pan out well and was ruled against by the Federal Trade Commission in 1995 to avoid the monopoly of the market.

But Coke did acquire certain rights to Dr Pepper outside the US in places like Europe and South Korea.

While Pepsi holds some international distribution rights to Dr Pepper too. These rights are active in locations where Dr Pepper doesn’t have a sizable market share to distribute its products.

So Pepsi and Coca-Cola facilities handle the bottling and distribution in those places.

What Is It Made Of?

The recipe for the Dr Pepper soft drink is a top-level trade secret.

The recipe was allegedly split into two halves and kept in safe deposit boxes locked up in two separate Dallas banks so that nobody can ever come into possession of the complete formula.

However, in 2009, an old ledger book purchased at an antique store by Bill Waters was reported to have contained what looked like recipes and formulas.

Flipping through the pages of the book, he found a recipe titled “Dr Peppers Pepsin Bitters” and thought that it was the early recipe for the popular Dr Peppers drink.

Later on, Keurig Dr Pepper said it wasn’t the formula for Dr Pepper but a recipe for a digestive aid.

The collector, however, went ahead to put the book up for auction in May 2009, but no one bought it.

To this day, nobody knows the exact combination of the Dr Pepper soft drink. Coca-Cola is rumored to follow the same pattern to keep its formula a secret as well.

It’s a unique kind of drink with a taste of its own. Rumor surrounding the drink since the 1930s is that it contains prune juice.

An official FAQ from Dr Pepper answered this question saying “Dr Pepper is a unique blend of natural and artificial flavors; it does not contain prune juice.” (FAQs | Dr Pepper)

The basis for this claim is still unknown. Some believe it all started with a delivery man from a long-time competitor of Dr Pepper trying to discourage store owners from stocking the drink.

Others think prune juice is one of the ingredients because the taste is somehow similar to that of prune juice.

Dr Pepper is an independent part of a larger conglomerate called, Keurig Dr Pepper. It is sometimes bottled and distributed by Coke or Pepsi depending on where you live.

In addition to Dr Pepper being the focal point of the Keurig Dr Pepper brand, other products include: 7Up, Schwepps, squirt, Mott’s, Clamato, A&W, Crush, Sunkist Soda (In no particular order.)

Dr Pepper has experienced intense oppositions over the years but has, at every point, proven to be America’s favorite beverage drink leading in both flavor, taste, and economic value.