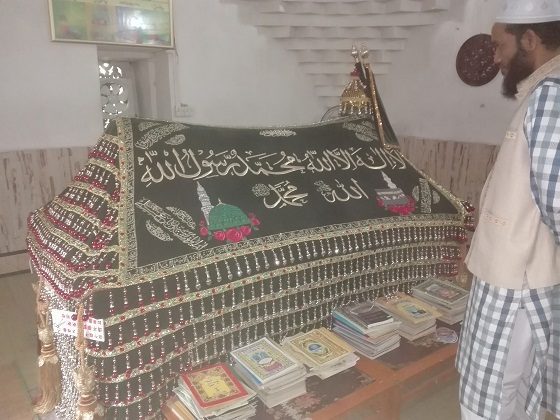 Saʿad ibn Abī Waqqās (Arabic: سعد بن أبي وقاص‎) was an early convert to Islam in 610–611 and was one of the important companions of the prophet Muhammad (Say, Sallallahu Alaihi Wasallam). Sa’ad was the 17th person to embrace Islam at the age of 17. He was one of those ten men who were given the good news of Jannat.

The full name of Abi Waqqas was Abu Ishak Saad. His father’s name was Abi Waqqas Malik. The name of his mother is Amna. Hazrat Saad ibn Abi Waqqas was one of them who turned into a Muslim in the beginning of Islam. His brother was Hazrat Umair. He was martyred in the battle of Badar. His son was Umar ibn Sa’ad who played an active and important role in Battle Of Karbala.

Hazrat Sa’ad was a very close friend of Abu Bakar (RA). He got the news of Islam from that great man. He turned into Muslim by Abu Bakar’s impression. According to Saad, he was the 3rd man of Islam. He did Hijrat to Madina with all other Muslims. He participated in all the battles of Islam. He was the fighter of Allah and the fighter of the ideology of Muhammad (Say, Sallallahu Alaihi Wasallam).

He fought in Badr valiantly. He fought at the battle of Badr with his young brother Umayr. Being only in his early teens, Umayr was denied access to battle, but after struggling and crying, he was later given permission by Muhammad (SA) to fight in battle. Saʿd returned to Madina alone; Umayr was one of the 14 Muslims who died in the battle.

Abi Waqqas was a wise man as well. He was one of the major weapons of Islam. In the battle of Khondok, he uprooted an eye of a kafir and Rasulullah (Sallallahu Alaihi Wasallam) suddenly laughed at the scene. He was in many important charges during the khelafat of Abu Bakar. He brought a lot of subjugation for Islam during the khelafat of Omar. Hazrat Sa’ad also contributed in the khelafat of Usman (RA). After the martyr of Usman, he didn’t participate in the works of khelafat any more. After the martyr of Usman (RadiAllahu Anhu), Muslims were divided into many groups. They couldn’t uphold the instruction of Quran and Hadith perfectly about unity. At that time, Sa’ad ibn Abi Waqqas remained neutral. He didn’t take any side. Hazrat Sa’ad (RadiAllahu Anhu) was very much worried about the situation of Muslims. He followed the belief that hurting a Muslim is always forbidden.

He was always busy with the thought of a Muslim world, and he always thought of the way to Allah and His Rasul. He always was busy doing welfare for Islam and Muslim. Hazrat Sa’ad was the worrier who never left. He always kept himself busy in the works of Islam. He was a true worrier of Rasulullah. He should be an origin of inspiration for us. May Allah dignify him hereafter as he dignified him in the earth.

After entering into China on 650, Saad Ibn Waaqas invited the Chinese Emperor Tung (Yung-Wei) to embrace Islam. To show his admiration for Islam the Emperor Tung ordered him for the establishment of a Mosque in Canton, China. According to the Islamic history in China, Huaisheng Mosque is the first mosque in China which was built by Sa’ad Ibn Abi Waqqas (RA). During his preaching Islam in China, he was died and buried in the province of Guangzhou (Early Canton).

According to Hadith, “To urge him on [during Uhud], Muhammad said: “Shoot, Saʿd …may my mother and father be your ransom.”. This is was also reported by Ali ibn Abi Talib who said that he had not yet heard Muhammad promising such a ransom to anyone except Sa’ad Bin Malik. Bukhari, Volume 5, Book 59, Number 389.

It should be noted that Sa’ad bin Malik and Sa’ad bin abi Waqqas are the same person.