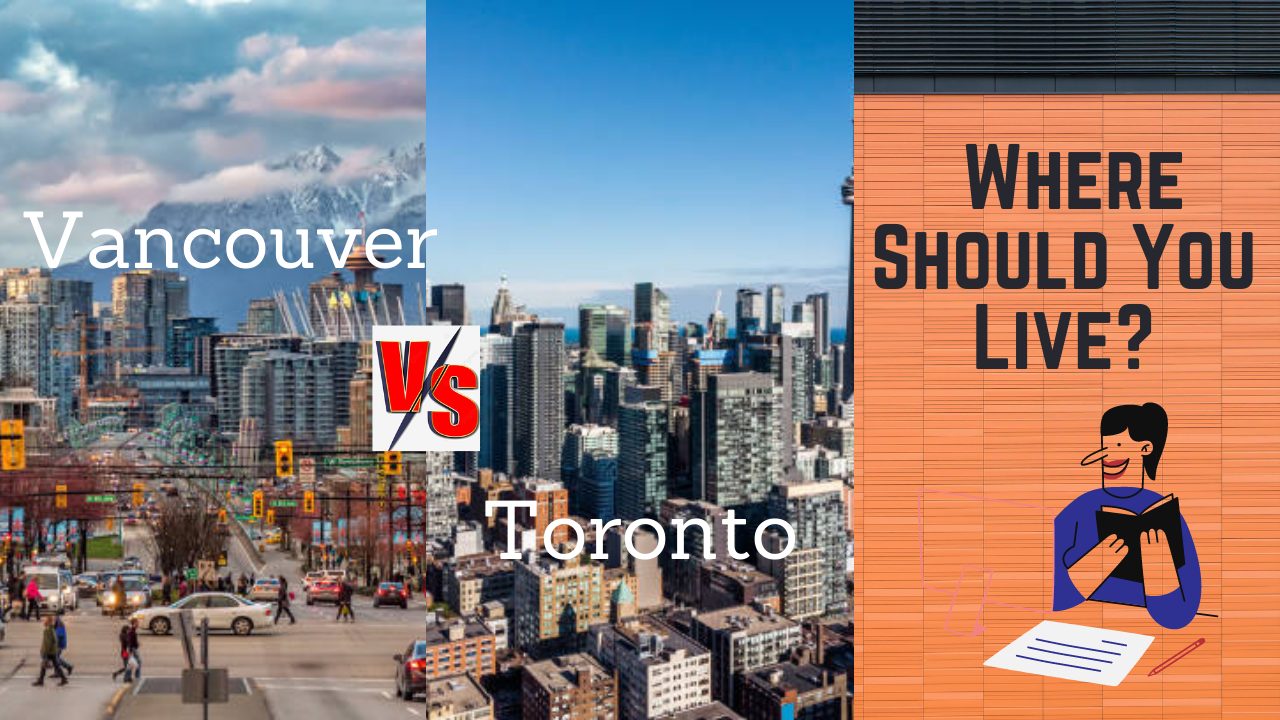 Today we will share the comparison between Toronto and Vancouver. It will  help you to choose your living area when you are thinking of moving from any other cities or you are choosing cities for your education or jobs or any family issues. So the article is all about Vancouver Vs Toronto, where you can live?

Both are big cities with a huge population and growing economies, exciting activities, gorgeous scenery and most interesting tourist places with all of the local services in your budget friendly life .

However, it is really a challenging task to choose between Vancouver and Toronto to live here.As you know both Cities are very different.

For example, many people in Toronto are associated with New York City. On the other hand, Vancouver has a Western vibe about it, which reminds people more of San Francisco city.

Public Transit in Vancouver Vs Toronto

First of all you have to check and consider transporting facilities within both cities. In Vancouver, TransLink operates the public transit systems. In Toronto,  Toronto Transit Commission (TTC) is operating the systems of public transit.

Keep reading to Know all you need about public transits of these cities.

Here you can see the table where you can find out the average costs of public transportation in Vancouver city.

Check details about the costs of translink.

What Are the Public Transit Opening Hours in and around Vancouver?

How does public transit work in Vancouver?

Ans: SkyTrain and SeaBus rides required a 1-, 2-, or 3-Zone fare, depending on the time of day and zones travelled. Buses are a one-zone fare, all day, every day. … All journeys starting after 6:30 p.m. (weekdays) and all day on weekends and holidays, across the entire Metro Vancouver region, are a 1-Zone fare.

The subway is served by two major lines in Toronto city .

Here you can see the table where you can find out the average costs of public transportation in Toronto city .

Note: There is no fee for children between the ages of 12 and under 12 .Check details here:(*TTC)

What Are the Public Transit Opening Hours in Toronto?

Is transit free in Toronto?

Answer: You pay a single fare for each one-way trip. The same fare covers subways, streetcars, and buses within Toronto city .

So we can say that one difference between the two is that:

“ TransLink operates zone-wise and offers a compass card along with concessions. Thus making it cheaper than Toronto Transit Commission .

Cost of Groceries in Vancouver vs Toronto

The cost of groceries is the another important point to choose and consider from these two cities.

In the grocery department, Vancouver is affordable around pricing. Because in Vancouver you require 227.35$ per month per person.On the other hand in Toronto you need 283.60$.

What to Do in Vancouver vs Toronto

Are you looking for something exciting to do in Vancouver and Toronto? We got you covered.

Do you want to go outdoors every night ? or want to go for some small outing every day morning or in the afternoon time or on the weekends? For you, Vancouver is the Best place. All Outdoor activities, including hiking, biking, running, skiing, paddling, and diving and all of the entertainment are available in the city centre. You can also drive up to the Sea-to-Sky Highway, hike on the Quarry Rock Hike , and cycle around Central Valley Greenway . So there are a lot of activities for you to experience. However, there are also a lot of activities in the Vancouver city, Like excellent restaurants and art galleries etc .

If you compare everything between Vancouver and Toronto, then you will be able to understand that Toronto is for the people who want to  enjoy their life from every point . If you love nature, Toronto  is not the ideal city for you. However, there is a beautiful Toronto Music Garden for those kinds of people who love nature.  Excursions up the Humber River and fine dining on the picturesque Humber River are also one  of the favourite activities of people living in Toronto.

In Toronto there is an Art Gallery of Ontario for those people who love arts . In short, Toronto is the biggest city in Canada  with some exciting places for your life.

Cost of Entertainment in Vancouver vs Toronto

The cost of entertainment in Vancouver and Toronto looks the same. However, In Vancouver you can save some more pennies.

Housing in Vancouver vs Toronto

Compared to the average cost of housing in every city in Canada , Toronto and Vancouver are both very expensive places to live, with housing prices and day-to-day costs considered.

Cost of Housing in Vancouver

Look at the table below to understand the costs of housing in Vancouver.

How Much Is a House in Vancouver?

How do I find housing in Vancouver?

Here are a  lot of websites where you can find a house for you and buy or rent. Here is some of them: Craigslist.

Cost of Housing in Toronto

Look at the table  below. Where you can understand the cost of housing in Toronto, including various apartment types and pricing.

How Much Is a House in Toronto?

After all Housing costs are expensive in both cities (Vancouver and Toronto). However, you can pick cheaper houses .But Vancouver is a little bit reliable from the pricing.You can consider Vancouver about living.

Job Opportunities in Vancouver vs Toronto

Canada has a low unemployment rate in all of the cities , the British Columbia economy is typically diversified and robust. People work as software developers, accountants, marketers, advertisers, and across various occupations in a variety of businesses in Vancouver. Outside of Vancouver , there are several outdoor employment options for people of all skill levels. Within Canada, the province has one of the most robust and most diversified economies. They have the good number of economic growth.

Economy of Toronto , like Vancouver’s, is also vital. This is due in no small part to diversification. For example, in Toronto, banks and financial organisations have a strong presence. Toronto is located within the main city. While this implies that Toronto has a healthy banking option, it also suggests that Toronto’s primary industries are heavily influenced by finance and banking .If you work in the financial industry of Toronto, then I will be very good for you. However, if you wish to work in other sectors, Vancouver is always a better option.

Check this: (* job and sallary compare in vancouver & toronto)

Cost of Living in Vancouver vs Toronto

It is important to consider how much you will need to spend to live comfortably in a new place. Looking at the table below , you can see that the cost of living in Toronto is very expensive. It has a more expensive average living cost in terms of utilities, transportations, grocery costs, and entertainment. Read Now: Choose The Right Calgary Moving Companies

However, if you plan to buy a car, In Vancouver,you will get higher insurance cost compared to Toronto. This is primarily because the province of British Columbia, where Vancouver belongs, has the most expensive car insurance costs. The cost of living in Vancouver is a little bit more comfortable than Toronto.

The Most Frequently Asked Questions About Vancouver and Toronto

What Is the Biggest Difference Between Vancouver and Toronto?

Here is some big and significant difference between Vancouver and Toronto.

Where to Live in Vancouver?

Where to Live in Toronto?

Is Tax Cheaper in Vancouver vs. Toronto?

The federal tax rate is the same in Vancouver and in Toronto. Applicable tax on the taxable income includes:

There are three types of sales taxes in Canada. In the province of British Columbia, they have PST and GST that are set at about 7% and 5% respectively, coming to a total of 12%. Read Now: 5 Best Pho Restaurants in San Diego in 2022

There are three types of sales taxes in Canada. In Ontario, they have HST which is set at about 13%.

Read Now: IS DR PEPPER A COKE PRODUCT ? & WHAT ARE THE ADVANTAGES AND DISADVANTAGES OF USING SOLAR ENERGY